The Buddha realized the absolute nature because he could really look at things without any deception — without deceiving anyone, and without deceiving himself. It is very clear that we don’t want to be deceived. We want to see the truth, but most of the time it’s just a weak intention. When it really comes to not acting deceptively or not being deceived oneself, so many insecurities of ego arise. When we cannot separate ourselves from our ego desires then we are vulnerable to being deceived and being caught up in our own self-deception. We believe in impermanent things as if they were permanent, or believe that things which do not make us happy are actually a source of our happiness. We deceive ourselves constantly in these ways. Where does all of this come from? When we cannot separate ourselves from our own ego’s insecurities, when we believe so much in the existence of our own ego, then we are vulnerable. We simply become vulnerable to believing in illusory things, while insisting that they are something other than an illusion. We exist in the relative world, holding on to the relativity as an absolute thing, and holding onto our ego—something that actually doesn’t exist — as something that is very much part of who we are. In that fundamental way we lose our honesty, we become caught in self-deception, not realizing the truth of our situation. We should contemplate the courage of the Buddha, who became a pioneer of honest beings, someone who traveled on the path of truth by not believing in his own ego, and the emotions of self-clinging, as real. He discovered this truth and has shown us that path. In so doing, he offered such a great service to mankind. This is why we respect and emulate him, and should attempt to follow his example of becoming honest, by genuinely examining our mind and our interactions with the world. 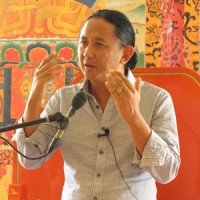 Read a random quote or see all quotes by Dzigar Kongtrul Rinpoche.