“That which is seen and that which is touched are of a dream-like and illusion-like nature.
Because feeling arises together with the mind, it is not [ultimately] perceived.”
~Shantideva

There is nothing whatever that has a true mode of existence. Nevertheless, this does not suggest that a person who experiences feelings and the feelings themselves — pleasant and unpleasant — are utterly non-existent. They do exist, but in an untrue fashion. Thus, the things that we see and touch have a dream-like and illusion-like quality.

In the second line the author refutes the true existence of the mind that experiences feelings. Since feelings arise in conjunction with the mind, feelings are not perceived by the mind that is simultaneous with them. There must be a causal relationship between the experienced object and the experiencing subject. If two entities are substantially distinct and exist simultaneously, there could be neither a causal relationship nor an identity relationship between them.

For this reason the author denies that either [intrinsic] relationship could hold for the feelings and the awareness that is simultaneous with them. Two mental events that arise in conjunction with each other are not able to apprehend one another. This holds true for all states of awareness. Thus, feelings are not observed by the awareness that arises in conjunction with them and that exists simultaneously with them. 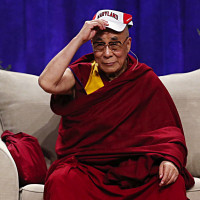 from the book Transcendent Wisdom
Read a random quote or see all quotes by the 14th Dalai Lama.