Can the Dead Talk to the Living ~ Dzongsar Khyentse Rinpoche was last modified: June 6th, 2022 by dorjeduck

One of the most painful experiences suffered by bardo beings is the sudden loss of the kind of social interaction they were used to while they were alive. They feel lost, abandoned and very lonely.

This is one of the reasons why the motivation and actions of the living are so important, especially when it comes to the distribution of the dead person’s money, resources and belongings.

The dead probably only react strongly to the living when they are provoked. But extreme emotions are very dangerous for dead people and if the bardo being were to get angry because a loathed cousin had taken possession of a much-loved leather attaché case, that flash of emotion could have the power to block the dead person’s progress through the karmic bardo of becoming and may even cause them to get stuck as a negative spirit. If that were to happen, their bardo experience would not be limited to forty-nine days, it could last for aeons. 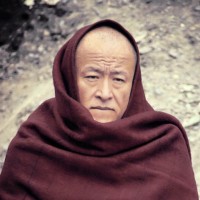