Cultivating forbearance with the kleshas as a game rather than a practice or training ~ 17th Karmapa was last modified: August 4th, 2016 by dorjeduck

When I say, “they are masses of defects” I mean understanding that the kleshas or disturbing emotions are completely defective, completely rotten, or, I don’t want to say “bad,” but like bad, that there is no part of them that is worthwhile. An analogy for this and how it gives you the ability not to indulge the kleshas even in situations of adversity is: Someone asked you to do something that you had no interest whatsoever in doing. You would not have to think about it. “Do I want to do this or not?” You would immediately be able to clearly state to the person, “I do not wish to do this.” And that is the way you respond to the kleshas when you have correctly observed their defective nature that they are naturally faulty.

Nevertheless this type of forbearance with the kleshas does not initially arise spontaneously within us. It is something we have to develop through conscious effort. It may be best to regard the effort and process of cultivating this forbearance as a game rather than a practice or training. If we are about to do something and someone tells us, “OK, now we are going to study,” the whole thing becomes a little depressing. We become depressed by the word “study.” But if someone were to say, “OK, the study is over now. Now we are going to play a game,” then the concept “game” cheers us up and makes us enthusiastic, even though the game may be just as much a matter of learning as the supposed study was. Therefore, in the same way I think it is best if we avoid the concept of practice here and think of the approach we take to developing forbearance with the kleshas as a kind of game. Then we will be able to enthusiastically put a great deal of effort into it, provided that we think of it as a game and not as a process of study, training, or practice. 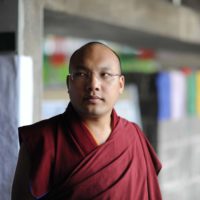 from the book Compassion NOW!