As for some further explanation of the term “bodhisattva”, its definition is very specific. Sometimes “bodhisattva” is misunderstood as simply meaning somebody who has concern for other sentient beings, and who cares for them. Although this is very good, and constitutes one of a bodhisattva’s ways of dealing with others, it does not make a person a bodhisattva. The defining characteristic of a bodhisattva is the development of bodhichitta, the wish to attain enlightenment in order to benefit beings; once this wish has arisen one becomes a bodhisattva. When we like to give people food, clothing, and shelter, this is very good; a bodhisattva should do these things if it is the best he or she can do, but through such actions alone we will not become bodhisattvas. A bodhisattva is someone who is inspired by the aspiration to realize enlightenment for the benefit of all sentient beings. This is bodhichitta, the characteristic of a bodhisattva. To understand this definition is quite important, as it describes somebody who is wise as opposed to someone who is a very good person but not necessarily enlightened. Thus, the definition of who is a bodhisattva is directly related to enlightenment, to buddhahood. 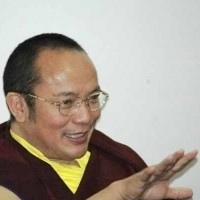 from the book The Third Karmapa´s Mahamudra Prayer

Read a random quote or see all quotes by Tai Situ Rinpoche.

Further quotes from the book The Third Karmapa´s Mahamudra Prayer