Someone once asked me, “What would it feel like to have burned up all those seeds, to be a person who no longer has any aggression?” The person who asked this was thinking that such a person might be pretty boring. No juice, no passion. I answered that I really wouldn’t know from personal experience, but I imagine that such a person would be great company. If you dissolved your aggression, it would mean that other people wouldn’t have to walk on eggshells around you, worried that something they might say would offend you. You’d be an accessible, genuine person. The awakened people that I’ve known are all very playful, curious, and unthreatened by things. They go into situations with their eyes and their hearts wide open. They have a real appetite for life instead of an appetite for aggression. They are, it seems, not afraid to be insecure. 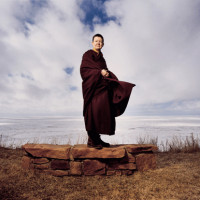 from the book Practicing Peace in Times of War
Read a random quote or see all quotes by Pema Chödron.

Further quotes from the book Practicing Peace in Times of War: