Some people think that Buddhism is a philosophy and not a religion; but Buddhism is neither a nihilist philosophy nor an eternalist religion. This is a complete deviation whose source is material judgment, made by people who try to find out about Buddhism but merely focus on its objective, material aspects out of their own material habit. Through only paying attention to the outer appearances and activities of Buddhist organizations and scholars, they only see Buddhists studying and debating, without understanding that the purpose of their study is to lead to practice and to open wisdom. Then, deciding that what is studied and debated resembles the refined logic of some subtle, worldly philosophies, they speculate that the ultimate teaching of Buddhism must be philosophy. They do not see meditators who are practicing inconspicuously, and they do not see the development of the inconceivable, naturally secret, spiritual qualities which cannot be observed because they are intangible.

The Buddhist view is to recognize that we must not remain within ordinary phenomena by following a worldly philosophy limited to ordinary, substantial reasoning. We must decide to increase pure phenomena by following a spiritual philosophy which goes beyond ordinary reasoning and leads to enlightenment. Buddhist philosophy is entirely spiritual. Its purpose is to refute the views of the two extremes of nihilism and eternalism by the skillful means of wisdom, to release all beings to enlightenment. 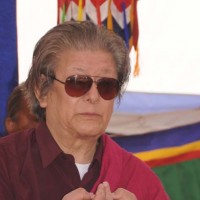 from the book White Sail: Crossing the Waves of Ocean Mind to the Serene Continent of the Triple Gems
Read a random quote or see all quotes by Thinley Norbu Rinpoche.