In his infinite wisdom the Buddha Shakyamuni recognized that although beings may be bewildered and struggling with the results of their bewilderment, their situation is not hopeless. As he saw the workability of the human condition, the Buddha’s compassion became overwhelming. Had the plight of beings been hopeless, if there was nothing that could have been done, the situation would have been entirely different. 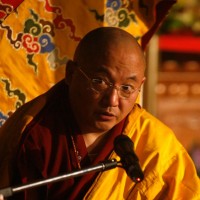 The Way of the Buddha

Read a random quote or see all quotes by Gyaltsab Rinpoche.