Just like an arrow shot by a skillful archer as soon as the string is released it does not stay but quickly reaches its target, so also is the life of humans. 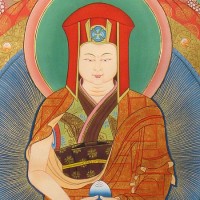 from the book The Jewel Ornament of Liberation: The Wish-Fulfilling Gem Of The Noble Teachings

Read a random quote or see all quotes by Gampopa.

Further quotes from the book The Jewel Ornament of Liberation