The experiences of the six realms ~ Chögyam Trungpa was last modified: September 25th, 2016 by dorjeduck

And strangely enough, these experiences of the six realms – gods, jealous gods, human beings, animals, hungry ghosts, and hell – are ‘space’, different versions of space. It seems intense and solid, but in actual fact it isn’t at all. They are different aspects of space – that’s the exciting or interesting part. In fact, it is complete open space, without any colors or any particularly solid way of relating. That is why they have been described as six types of consciousness. It is pure consciousness rather than a solid situation – it almost could be called unconsciousness rather than even consciousness. The development of ego operates completely at the unconscious level, from one unconscious level to another unconscious level. That is why these levels are referred to as loka, which means ‘realm’ or ‘world’. They are six types of ‘world’. Each is a complete unit of its own. In order to have a world, you have to have an atmosphere; you have to have space to formulate things. So the six realms are the fundamental space through which any bardo experience operates. Because of that, it is possible to transmute these spaces into six types of awakened state, or freedom. 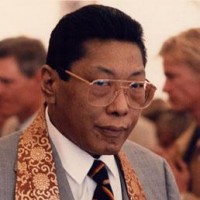 from the book The Collected Works of Chogyam Trungpa, Volume 6
Read a random quote or see all quotes by Chögyam Trungpa.

Further quotes from the book The Collected Works of Chogyam Trungpa, Volume 6: