The nature of the mind has never changed ~ Dilgo Khyentse Rinpoche was last modified: November 18th, 2016 by dorjeduck

Thoughts manifest themselves within emptiness and are reabsorbed into it like a face appears and disappears in a mirror; the face has never been in the mirror, and when it ceases to be reflected in it, it has not really ceased to exist. The mirror itself has never changed. So, before departing on the spiritual path, we remain in the so-called “impure” state of samsara, which is, in appearance, governed by ignorance. When we commit ourselves to that path, we cross a state where ignorance and wisdom are mixed. At the end, at the moment of Enlightenment, only pure wisdom exists. But all the way along this spiritual journey, although there is an appearance of transformation, the nature of the mind has never changed: it was not corrupted on entry onto the path, and it was not improved at the time of realization. 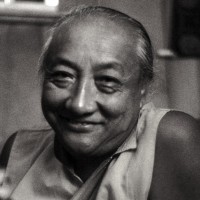