The root of samsara ~ Lama Zopa Rinpoche was last modified: May 6th, 2022 by dorjeduck

Nothing exists in reality. Nothing exists the way it appears to exist, as real from there. Everything is totally empty. It’s like a dream, like an illusion.

If we are able to meditate in this way, looking at all this as like a dream, an illusion, a mirage—all the different examples—then it becomes very interesting. There is nothing to become attached to because it is not real.

For example, if we recognize a dream as a dream, there is nothing to be attached to and there is nothing to be angry about. In a dream, somebody abuses us but if we can recognize the dream as a dream, the abuse does not bother us at all. Similarly, some object of desire appears in our dream, but recognizing it as just a dream, we are not agitated. Nothing disturbs us; our mind remains utterly peaceful. Anger and attachment do not arise, so we have a very, very interesting life.

Because things appear to us not as a dream but as real from their own side, which is how it has been since beginningless time, realizing emptiness is vital. It is more important than any job, than all the money in the world, than anything. To cut the root of suffering, ignorance, and be free forever from the oceans of samsaric suffering, there is nothing more important than realizing emptiness.

We need to cut the wrong belief that whatever object that appears to us is real, which is how it appears. As I have said, in the first moment the I appears as merely imputed; in the second it appears as real, as a real I; then, in the third moment, we believe that I to be real. That wrong concept is the root of samsara. 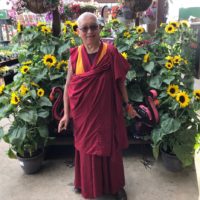 Read a random quote or see all quotes by Lama Zopa Rinpoche.