This true mindfulness is the single sufficient king. We can also call that equanimity, the meditation state. Equanimity literally means “placing evenly.” What is placed evenly? It is rigpa, awareness. Placing rigpa in evenness means leaving it alone. It’s not placing it as being aware of something other. Just leave your awareness as it is, alone. It’s not a sense of nowness, nor is it a sense of the past or the future. Rather it is something which embraces past, present, and future, which embraces the nowness but is not the nowness itself. 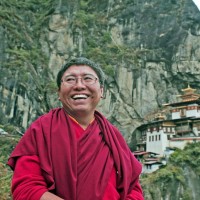 from the book Carefree Dignity: Discourses on Training in the Nature of Mind

Read a random quote or see all quotes by Tsoknyi Rinpoche.