First of all, what do we mean by meditation and post-meditation? When faults such as heaviness and wildness of mind have been cleared away and the mind rests within meditation, this resting within recognition of mind as it is—that is what is meant by meditation. When one has “risen from that,” which does not mean getting up from one´s cushion but rather that one´s mind has shifted, and then after one´s mindfulness of fundamental nature is restored — that is what is referred to as post-meditation or subsequent attainment, indicating one has recovered what one had before. 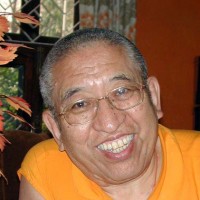 from the book Looking Directly at Mind: The Moonlight of Mahamudra
Read a random quote or see all quotes by Thrangu Rinpoche.