The practitioner of self-liberation ~ Patrul Rinpoche was last modified: December 15th, 2017 by dorjeduck

The practitioner of self-liberation is like an ordinary person as far as the way in which the thoughts of pleasure and pain, hope and fear, manifest themselves as creative energy. However, the ordinary person, taking these really seriously and judging them as acceptable or rejecting them, continues to get caught up in situations and becomes conditioned by attachment and aversion.

Not doing this, a practitioner, when such thoughts arise, experiences freedom: initially, by recognizing the thought for what it is, it is freed just like meeting a previous acquaintance; then it is freed in and of itself, like a snake shedding its skin; and finally, thought is freed in being unable to be of benefit or harm, like a thief entering an empty house. 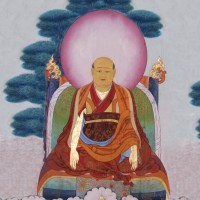 quoted in the book You Are the Eyes of the World

Read a random quote or see all quotes by Patrul Rinpoche.