Just as a person who has a ‘bile’ disease sees a shell as being yellow even if one can see objectively that that is not its true color, so in just the same way, as a result of the particular karmic causes of sentient beings, the various illusory visions manifest. Thus, if one were to meet a being of each of the six states of existence on the bank of the same river, they would not see that river in the same way, since they each would have different karmic causes. The beings of the hot hells would see the river as fire; those of the cold hells would see it as ice; beings of the hungry ghost realm would see the river as blood and pus; aquatic animals would see it as an environment to live in; human beings would see the river as water to drink; while the demi-gods would see it as weapons, and the gods as nectar. This shows that in reality nothing exists as concrete and objective. Therefore, understanding that the root of Samsara is truly the mind, one should set out to pull up the root. Recognizing that the mind itself is the essence of Enlightenment one attains liberation. Thus, being aware that the basis of Samsara and Nirvana is only the mind, one takes the decision to practice. 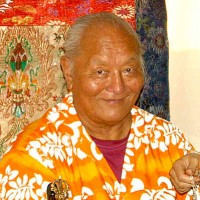 from the book The Mirror: Advice on the Presence of Awareness

Read a random quote or see all quotes by Namkhai Norbu Rinpoche.

Further quotes from the book The Mirror: