The main practice in vajrayana consists of the generation stage, the cultivation of the practice of regarding oneself as the deity. From an ordinary point of view, we might regard this as useless. We would think, “Well, I am not a deity. What use is there in pretending to be a deity?” But in fact, the root of samsara is the habit of impure perception. By regarding oneself as a deity one gradually purifies, weakens, and removes that habit and replaces it with the positive habit of pure perception. It is for this reason that the meditation upon oneself as a deity is considered so important. 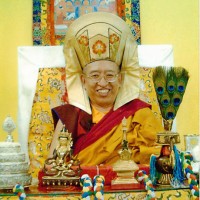 from the book Medicine Buddha Teachings

Read a random quote or see all quotes by Thrangu Rinpoche.