We should really have this aspiration. We should pray that one day we reach a stage where we have enough courage to become just like these eccentric people. Right now, we can only afford to be slightly nonconformist. A little bit of craziness is okay. It’s kind of character building activity. But we are very scared of going beyond that! We would be outcast and all that.

So we should pray that someday, we really become crazy. Not in the sense of becoming something like a lunatic from one of these asylums. The craziness we are referring to means going beyond the “eight worldly dharmas”; truly not caring whether you are being praised or criticized is the ultimate craziness. From the mundane, worldly point of view, whenever you are praised, you are supposed to be happy; when you are criticized, you are supposed to be unhappy. However, the sublime beings are not moved – that’s why we think they are crazy. This is what you have to aim for.

Don’t do this right now, because it will backfire on you! Just aspire. If you tried doing this now, it would not only fail to help your practice it would also upset others. So continue In a way that any decent human being would want you to behave. But at the same time, let this alarm continuously sound in your head: “All of this is useless.” 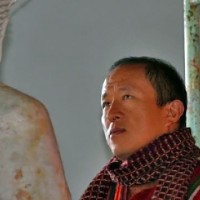 quoted in the book Entrance To The Great Perfection: A Guide To The Dzogchen Preliminary Practices

Further quotes from the book Entrance To The Great Perfection