If we are missing nonduality, our every act will lead to disappointment. How far do you go if you are a therapist trying to help an alcoholic or drug addict? If this person has somehow decided to become a drug addict for the next five thousand lifetimes, you, as a bodhisattva, must have the determination to be reborn wherever they are going to be reborn. You might, for instance, aspire to be reborn at the right time and place to be nearby him or her. Say for example, you are a bodhisattva and have been trying to help this drug addict for over two thousand lifetimes. Now, somewhere in an obscure place, their 2,042nd rebirth is going to happen. Although you need to appear for only half a day, in order to do that you actually have to be reborn there. It is almost a waste of a complete whole life, to be reborn there just to do something that will take only half an hour, or half a day, but as a bodhisattva you must do it. That is what we call the strength and quality of relative compassion.

Now we come to the real quintessence of bodhichitta. Why does a bodhisattva have this degree of compassion? Why don’t they give up? What is the real basis of their confidence? The bodhisattva realizes that the notion of “drug addict,” “problem,” “healing,” and “being healed” are all in their own mind. The bodhisattva knows that none of this exists “out there” somewhere, externally and truly. Based on this wisdom, the bodhisattva can develop compassion.

This understanding can really help. My own experience is like being a firefly in front of the sun. Even so, when I try to help people and things don’t work according to plan, I say to myself, “How can I get frustrated?” In the first place, I myself have set up a certain goal based on my own interpretation. In helping a person, I imagine that he or she should reach a certain level, but this is my own idea. After becoming obsessed with the idea of success, when the person is not there, I might lose hope and confidence in this person. Sometimes we do realize that it is all our own projection, but most of the time we don’t. Instead, we think: “This is how it should be. This is real success!” We don’t realize that it is all our own interpretation. This is where we go blind. When you are helping, if you know that your so-called “help,” “success,” and “failure” are all in your own mind, you won’t get worn out. Because you realize that it is all your mind’s doing, you won’t get tired. This is a very general and somewhat coarse example of ultimate bodhichitta. If you have this understanding, you have a complete picture of bodhichitta.

To reiterate, ultimate bodhichitta is an understanding of emptiness. Only when this is included is there a complete picture of bodhichitta. When we talk about bodhichitta, usually we make reference to something simple, such as a kind, compassionate heart, but that’s not all. This is something many people have. It does not necessarily make you a bodhisattva. Of course this is not to deny that there are very kind and compassionate people. There are people who may even sacrifice their lives for others, but still they may not be bodhisattvas. In fact, they are in danger of acting out their obsession and could end up being victimized by their goal-oriented mind. Being too obsessed with a goal can produce a lot of side effects, such as thinking, “This is how it should work!” With this approach, a bodhisattva can lose hope and determination when things do not work out; they may even stop being a bodhisattva. Having said this, a bodhisattva should not just do things aimlessly. 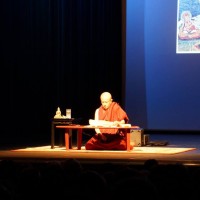 from the book Entrance To The Great Perfection: A Guide To The Dzogchen Preliminary Practices

Further quotes from the book Entrance To The Great Perfection