There’s an old story, told in several sutras, about a woman who had suffered the death of her young son. She refused to believe that her son was dead, however, and ran from house to house in the village asking for medicine to revive her child. Of course, no one could help her. The boy was dead, they pointed out, trying to help her accept the situation. One person, however, recognizing that her mind was deranged by grief, advised her to seek the Buddha — the most capable of physicians — who was staying in a monastery nearby. Grasping her child closely to her chest, she ran to where the Buddha was staying and asked him for medicine to help her child. The Buddha was in the middle of giving a talk in front of a large number of people; but the woman pushed through, and seeing her distress, the Buddha answered her request. “Go back to your village,” he advised, “and bring me back a few mustard seeds from a house where no one has ever died.” She ran back to her village and began asking each of her neighbors for mustard seeds. Her neighbors were happy to give them through an experience that cut deeper than words that she was not the only person in the world who had suffered a terrible personal loss. Change, loss, and grief were common to all. Though still grief stricken by the death of her son, she recognized that she was not alone and her heart cracked open. After the funeral ceremonies for her son were completed, she joined the Buddha and the disciples around him. She devoted her life to assisting others in achieving the same degree of recognition. 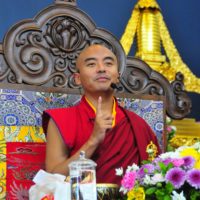 from the book Joyful Wisdom: Embracing Change and Finding Freedom
Read a random quote or see all quotes by Mingyur Rinpoche.