The lack of comprehension of reality ~ Matthieu Ricard was last modified: November 29th, 2016 by dorjeduck

As the contemporary Tibetan master Chögyam Trungpa explains, ‘When we talk of ignorance, it has nothing to do with stupidity. In a way, ignorance is very intelligent, but it is an intelligence that works exclusively in one direction. That is, we react elusively to our own projections instead of simply seeing what is there.’

This fundamental ignorance is linked to the lack of comprehension of reality, that is, the true nature of things, free from mental fabrications we superimpose upon it. These fabrications hollow out a gap between the way things appear to us and the way they are: we take as permanent what is ephemeral and as happiness what is usually a source of suffering – thirst for wealth, power, fame and fleeting pleasures.

We perceive the external world as totally autonomous entities to which we attribute characteristics that seem to us to belong to them by their nature. Things appear to us as intrinsically ‘pleasant’ or ‘unpleasant’ and we rigidly divide people into ‘good’ or ‘bad’, ‘friends or ‘enemies’, as if these were characteristics inherent to people. The ‘self’, of the ego that perceives them, seems to us equally real and concrete. This mistake gives rise to powerful reflexes of attachment and aversion, and as long as our mind remains obscured by this lack of discernment, it will fall under the sway of hatred, attachment, greed, jealousy, or pride and suffering will always be ready to appear. 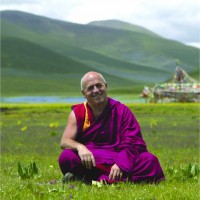 from the book Altruism: The Power of Compassion to Change Yourself and the World

Read a random quote or see all quotes by Matthieu Ricard.