Attaching More Importance to the Form of Our Religious Identities than to the Substance of What They Teach Us ~ 17th Karmapa was last modified: December 4th, 2016 by dorjeduck

In 2001, the huge Bamiyan Buddha statues in Afghanistan were intentionally demolished. From a certain perspective within Islam, these statues were offensive instruments of idol worship, while to Buddhists they were reminders of sacred principles and the very best of our innate human potential. Basically, we Buddhists use physical images in our spiritual practice, while Muslims worship without images. Clinging to either position was creating a wall between people. But they are just statues. Allowing ourselves to be pitted against each other over a statue – now that is really clinging to biases.

Personally, I do not see a basis for treating religious differences this way. A while after the Bamiyan Buddhas were destroyed, I had the opportunity to meet with an Afghan youth group working for peace. I suggested to them that we might view the coming down of the Bamiyan Buddhas as bringing down the walls between all peoples. If the presence of those statues was setting us at odds, perhaps we could see it as useful that they were brought down. This is how I felt about it.

Walls come up between people when we attach more importance to the form of our religious identities than to the substance of what they teach us. When spiritual beliefs are used to build up walls between people, this is a total misunderstanding of the purpose of spirituality. Spirituality should mean coming closer to yourself. When this happens, you become closer to others, too. Spirituality and religion should dismantle discrimination and labels, not shore them up. It should break, not create, barriers between people. 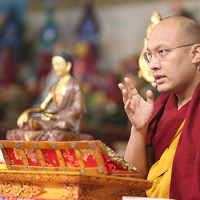 Further quotes from the book The Heart Is Noble