Giving without demanding anything in return ~ Chögyam Trungpa was last modified: December 22nd, 2015 by dorjeduck

Generosity here is not the conventional notion of being charitable. The idea is giving without demanding anything in return. You are willing to receive people into your territory, to offer hospitality and appreciate their existence and their presence – and then make no further demands. It could be very irritating and even terrifying to be a bodhisattva’s guest because of his way of being generous. You might think there is something fishy behind it: “Why should this guy be extremely kind and friendly to me and not demand anything? Maybe it’s a Mafia plot or something.” But if you come across such a thing, you should not be afraid. Usually one finds a genuine act of generosity more terrifying than partial generosity. because there is nothing to hang on to. If it is partial generosity, we can play games with it. We could give half an inch in exchange for the other person’s half an inch-it becomes a kind of bartering. But that element is absent here. 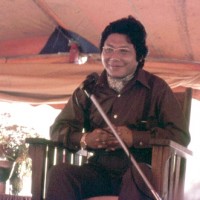 from the book The Lion's Roar: An Introduction to Tantra

Read a random quote or see all quotes by Chögyam Trungpa.

Further quotes from the book The Lion's Roar