While resting free of anything to imagine, like space, do not be distracted for even one instant. The one who trains like that can truly be called a ‘space yogi’. A yogi is an individual who connects with that which is naturally so. Space means that which always is. Remain without imagining anything at all, not meditating on anything. Once you start to meditate on space, it becomes an imitation. Simply allow the space to not wander. Remain undistracted. There is no impetus for any thoughts to reoccur. A thought is a mental way of formulating something — in other words, our attention formulates a thought. The thought doesn’t come from anywhere else. If we don’t think, where would a thought come from? In the basic space that is unimaginable, remain undistractedly. Let your indescribable awareness remain undistracted in the naked state of basic space. It doesn’t have to be imagined, because this basic space that is utterly naked is our own nature already. You don’t have to imagine that this is so. 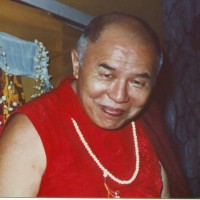 Further quotes from the book As It Is, Vol. 2: