The impulse to connect ~ 17th Karmapa was last modified: December 2nd, 2020 by dorjeduck

The impulse to connect arises naturally in human beings, as is clearly visible in us when we are children. Later, as we become adults, this ability is eroded by doubts, fears, and suspicions. For example, if there are two families living in an apartment building and each has a young child, the parents might pass each other in the lobby without exchanging a single word or even making eye contact, but the children will undoubtedly acknowledge each other when they meet. If a small child in front of the building spots another at a window on an upper floor, she may spontaneously wave, and the other child will wave back.
I have heard of a research study done on interaction in elevators between strangers, both human and chimpanzee. An adult human was told to take the elevator to the ground floor. On their way down, the elevator stopped on an intervening floor and another person stepped in and pressed the button for another intervening floor. The person in the elevator first often displayed agitation and certainly had no smile or word of greeting to spare for the person slowing them down in this way, even though they were sharing a small space. Yet when the experiment was done with two chimpanzees, when the chimpanzees suddenly found themselves in the same elevator, they expressed delight at meeting another of their kind and joyfully embraced one another. The human beings were also meeting another of their kind and, even more than chimpanzees, were equipped with the capacity to recognize that fact. We humans have so much in common and easily feel connected when we are young. But we often do not manage to retain the ability to feel spontaneously close to others as we grow older. 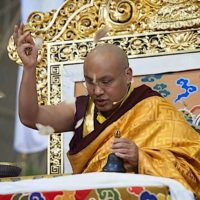 from the book Interconnected: Embracing Life in Our Global Society

Further quotes from the book Interconnected