Although Siddhartha realized emptiness, emptiness was not manufactured by Siddhartha or anyone else. Emptiness is not the result of his revelation, nor was it developed as a theory to help people be happy.

Whether or not Siddhartha taught it, emptiness has always been emptiness, although paradoxically we can’t even really say that emptiness has always been, because it is beyond time and has no form. Nor should emptiness be interpreted as negation of existence — that is, we can’t say that this relative world doesn’t exist either — because in order to negate something, you have to acknowledge that there is something to negate in the first place.

Emptiness doesn’t cancel out our daily experience. Siddhartha never said that something spectacular, better, purer, or more divine exists in place of what we perceive. He wasn’t an anarchist refuting the appearance or function of worldly existence, either. He didn’t say that there is no appearance of a rainbow or that there is no cup of tea.
We can enjoy our experience, but just because we can experience something doesn’t mean that it truly exists. Siddhartha simply suggested that we examine our experience and consider that it could be just a temporary illusion, like a daydream. 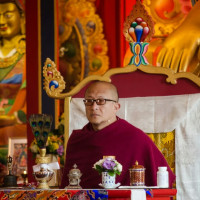