By and large, human beings tend to prefer to fit in to society by following accepted rules of etiquette and being gentle, polite, and respectful. The irony is that this is also how most people imagine a spiritual person should behave. When a so-called dharma practitioner is seen to behave badly, we shake our heads over her audacity at presenting herself as a follower of the Buddha. Yet such judgments are better avoided, because to “fit in” is not what a genuine dharma practitioner strives for.

Think of Tilopa, for example. He looked so outlandish that if he turned up on your doorstep today, odds are you would refuse to let him in. And you would have a point. He would most likely be almost completely naked; if you were lucky, he might be sporting some kind of G-string; his hair would never have been introduced to shampoo; and protruding from his mouth would quiver the tail of a live fish. What would your moral judgment be of such a being? “Him! A Buddhist?” This is how our theistic, moralistic, and judgmental minds work. Of course, there is nothing wrong with morality, but the point of spiritual practice, according to the vajrayana teachings, is to go beyond all our concepts, including those of morality. 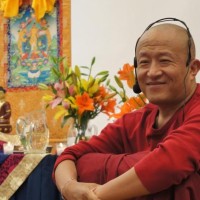 from the book Not for Happiness: A Guide to the So-Called Preliminary Practices
Read a random quote or see all quotes by Dzongsar Khyentse Rinpoche.

Further quotes from the book Not for Happiness: