To reject your aggression is a weakness ~ Dzongsar Khyentse Rinpoche was last modified: October 14th, 2016 by dorjeduck

As a Buddhist, you have been taught that aggression is generally considered to be a negative emotion. Therefore your immediate reaction to any aggressive tendency or thought that arises in your mind will be to reject it. And you reject it because you are in love with your “self,” which makes you an egoist. As an egoist, you do not want aggressive feelings or jealousy or any of the other negative emotions to spoil your chances of becoming renowned as a “good” Buddhist. Yet according to the greater view offered by the bodhisattvayana, to reject your aggression is a weakness. To reject the bad and only accept the good shows that you are still stained by the clinging to self that we call “ego.” Instead, when a bodhisattvayana practitioner notices his/her aggressive emotions, he/she should think, “Aggression is really bad! But I am not the only one who suffers from it — all sentient beings do! So, may I take on the aggression, jealousy and pride of all sentient beings.” From a relative point of view, what happens when you take on the pens when you take on the suffering of others in this way? Fundamentally, you go against the wishes of your ego. So, if your ego wants to be the holiest and most sublime of all beings so it can boast it has no desire or jealousy, this is exactly the practice you need to do to oppose and resist it. By continually applying it, the ego becomes smaller and smaller until finally it has nowhere to live. 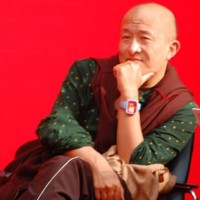 from the book Not for Happiness: A Guide to the So-Called Preliminary Practices

Further quotes from the book Not for Happiness