Imagine a beautiful casket so finely crafted that once it is shut, the seam between the lid and the base is entirely invisible. It appears to be a single, exquisitely worked piece of wood, not a casket at all, and nothing about it suggests any possible opening. This casket is exactly like samsaric life. Day after day, year after year, lifetime after lifetime, samsara has been so intricately contrived by the ego, the master craftsman, that the notion it can be broken open never suggests itself. If we stopped for a moment and took a long, hard look at our version of the world, we might detect a few tiny cracks here and there, but for the most part the thought doesn’t enter our heads.

If, by some chance, a tiny crack were to be discovered and someone managed to open the casket just a little, the entire system that is samsara would be disrupted. Nothing would ever be the same again, and the one who achieved this monumental feat would have shuffled one step closer to enlightenment. Of course, you would still be stuck with a partially open casket, but its workings would no longer seem so utterly mysterious.
A multitude of inexpressible things can open the casket anytime, anywhere, triggered by the most ridiculous situations — if you have merit, devotion, and pure perception. This opening is usually initiated by the guru — by a remark, a gesture, or perhaps a note. 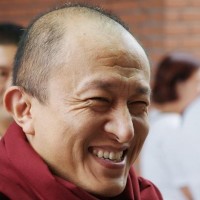