Even in this world, and even now, there are said to be many hidden yogis or discreet yogis, called bepay naljor in Tibetan. It means those realized ones who are not generally recognized as great spiritual sages or saints, but have deeply tasted the fruit of enlightenment, and are living it. Perhaps they are anonymously doing their good works here among us right now!

The infinite vast expanse is one’s own inconceivable nature. Who can say who has realized it and who hasn’t? When we travel around the world or experience other dimensions, there are so many beings who have tasted it. We can see it in their behavior, in their countenance, and in stories that are told—not just in the Dzogchen tradition or the Buddhist tradition, but in any tradition, and in our Western world too.

This true nature is so vast and inconceivable that even some birds and animals and beings in other unseen dimensions can be said to have realized it, as in some of the ancient Indian Jataka stories and other teaching tales. It is always said that everything is the self-radiant display of the primordial Buddha Samantabhadra. There are infinite numbers of Buddhas and infinite numbers of beings. Who can say who is excluded from it? 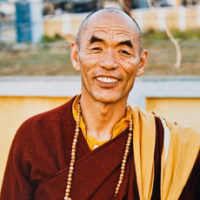 from the book Natural Great Perfection: Dzogchen Teachings And Vajra Songs
Read a random quote or see all quotes by Nyoshul Khen Rinpoche.