Already like that from the beginning ~ Tulku Urgyen Rinpoche was last modified: August 14th, 2022 by dorjeduck

According to the Dzogchen teachings, the state of primordial enlightenment has never been confused. The basic state of buddhas is like pure gold that is not covered by any dirt. Dirt is the example for the confused thinking that temporarily takes place. If the gold always remains pure, there is no cleaning to be done and there is no achievement of purity, because it already is like that from the beginning. That is the analogy for the state of primordial enlightenment of self-existing wakefulness that was never confused. If, first of all, there is no being confused then how can you use the phrase ‘being liberated’? It is impossible, because liberation is totally dependent upon having been confused. Since the awakened state of the buddhas are not confused, you cannot really say that buddhas become liberated either. It is only because of being mistaken that confusion can be cleared up. Unless there is confusion it is not possible to be liberated. 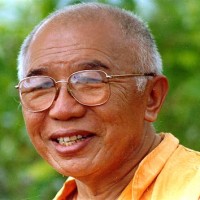 Further quotes from the book As It Is, Vol. 1