Most Vajrayana students are convinced they have boundless devotion for their guru, but in reality what they feel is more like admiration, in the same way they might admire a political candidate whose ethical and moral standing reassures them.

Not only is that not devotion, it’s actually quite dangerous. If the politician ignores you or does something slightly unsavory, even just once, the next chance you get, you will probably not vote for him. Likewise, if the guru at some point ceases to reassure you, you will want to switch gurus. This fickleness is what keeps politicians on a continuous campaign trail, trying to prove their worth and distributing freebies to make people feel special. No guru should have to campaign in order to fish out devotion from a student.

Some admiration may come naturally at the beginning of a guru-disciple relationship, but how do you get beyond merely liking the guru to true devotion? You can start by checking your motivation. Forget about enlightening all sentient beings; you should be following the guru because, at the very least, you’re seeking your own enlightenment. Yet many people approach the guru with a less straightforward motivation. 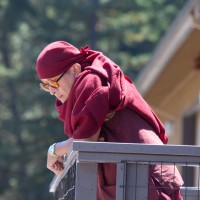