The British have this very romantic idea about ancient culture and wisdom, which is reflected in their academia. If an Englishman wants to study Buddhism, he begins by examining the root texts in original Pali or Sanskrit, and he studies the code of conduct Buddha prescribed for Indians twenty-five hundred years ago, and he feels loyal to that ancient atmosphere.
Many of us have these romantic notions, not realizing the contextual nature of these early rules. When we see a serene Theravada monk begging in the streets of Mandalay at sunrise, it makes our day. But if the same smooth-shaven, maroon-robed man was seen begging alms on Kensington High Street next to the Hare Krishnas, it would offend the sensibilities of the uptight British. Removed from his romantic setting, the monk is little better than a pest. My English friend seems to have forgotten that after Buddha offered these rules and regulations to his immediate sangha, he said the Vinaya will have to be determined by time and place. Aside from the four root vows — abstaining from sexual misconduct, stealing, killing a human being (born or unborn), and major deceit — there are no rules that apply across the board. But Trungpa Rinpoche taught that you can be a Buddhist and still be a successful banker or entrepreneur. This was a huge contribution to modern Buddhadharma.
If Trungpa Rinpoche had manifested as a typical monk from Surmang — wearing robes, exuding serenity, begging alms, and behaving perfectly from a vinaya point of view — at least he would have entertained those romantic, ancient morality–loving British. But would he have been able to reach all the others? Could he have inspired thousands of people to adopt the ancient vinaya rules of shirtless, dinnerless monastics? It’s well and good to daydream about the glory days of shaved heads and wandering ascetics, but if the venue and the times have changed, the methods must also change. 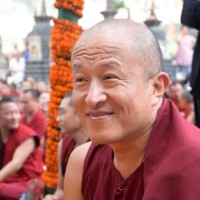