It’s usually safer to go with a guru who is not interested in fame. There is a chance that some gurus might be madly designing and printing pamphlets and buttons for the sake of all sentient beings. Not all lamas who are zealously promoting themselves and sitting on the highest thrones have an ulterior motive; some might actually be humble. But the greatest teachers of recent times said repeatedly and with complete conviction that they were not enlightened. They claimed to be totally ordinary beings, and they exhibited their humble devotion to their own gurus and teachers again and again. For example, when I asked Kyabje Dilgo Khyentse Rinpoche for his treasure teachings, his response was that there are so many great treasure teachings and that his were completely useless. He said I should not be wasting my time pursuing him. Instead, most of the time all he talked about was his devotion to his own teachers. 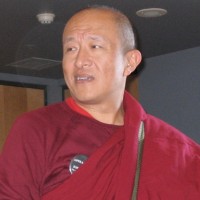