The Buddhist practice of nonviolence is not merely submissiveness with a smile or meek thoughtfulness. The fundamental cause of violence is when one is fixated on an extreme idea, such as justice or morality. This fixation usually stems from a habit of buying into dualistic views, such as bad and good, ugly and beautiful, moral and immoral. One’s inflexible self-righteousness takes up all the space that would allow empathy for others. Sanity is lost. Understanding that all these views or values are compounded and impermanent, as is the person who holds them, violence is averted. When you have no ego, no clinging to the self, there is never a reason to be violent. When one understands that one’s enemies are held under a powerful influence of their own ignorance and aggression, that they are trapped by their habits, it is easier to forgive them for their irritating behavior and actions. Similarly, if someone from the insane asylum insults you, there is no point in getting angry. When we transcend believing in the extremes of dualistic phenomena, we have transcended the causes of violence. 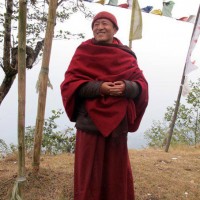