Free from the extreme of existence and that of nonexistence ~ Dilgo Khyentse Rinpoche was last modified: October 12th, 2017 by dorjeduck

This empty nature, the lack of intrinsic existence in phenomena, does not imply a blank naught in which there is nothing at all, as we find in the view of the nihilists. According to relative truth, all phenomena arise as a result of the interdependent conjunction of causes and conditions. This enables us to explain not only how samsara is formed but also it is possible to progress toward nirvana. There is no contradiction between the absolute nature and its infinite display and, because of this, one is free from the extreme of existence and that ofnonexistence, 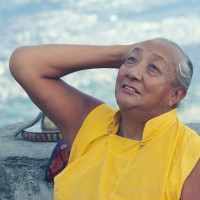 from the book Zurchungpa's Testament