The three cycles of Buddha Shakyamuni’s teachings are known as the three turnings of the wheel of Dharma.

In the first turning of the wheel, at Vārāṇasī, he taught the Four Noble Truths common to both Hīnayāna and Mahāyāna.

In the second, at Rājagṛiha, or Vulture Peak, he expounded the Mahāyāna teachings on absolute truth — the truth devoid of characteristics and beyond all conceptual categories. These teachings are contained in the Prajñāpāramitā Sūtra in One Hundred Thousand Verses.

The third turning of the wheel, at several different times and places, was devoted to the ultimate teachings of the Vajrayāna, or adamantine vehicle.

The Dharma of Transmission is the word of the Buddha as collected in the Tripiṭaka: the Vinaya, the Sūtras, and the Abhidharma.

The Dharma of Realization is the actual realization of the teachings, cultivated through discipline, meditation, and wisdom. 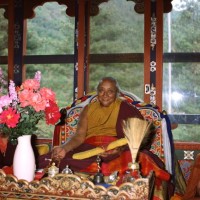 from the book The Heart Treasure of the Enlightened Ones